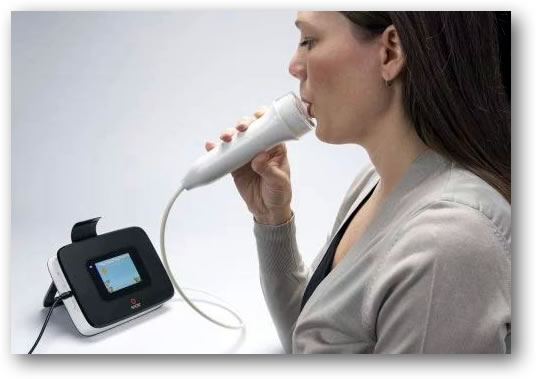 Monitor airway inflammation, monitor asthma
The evidence to the support monitoring FeNO in asthma management is considerable. Ever since 2000, FeNO has been included in the majority of clinical trials evaluating potential new anti-inflammatory asthma drugs. Furthermore, a recent literature search of the National Library of Medicine’s PubMed for asthma clinical studies involving FeNO, (using nitric oxide and asthma as search terms) produced over 3,000 articles. However, to categorize the majority of literature that supports the clinical and economic value in the management of asthma, we believe the following 5 reasons for monitoring FeNO have the greatest strength of evidence:
1. FeNO Aids in Diagnosis of Asthma and Identifies Patients with Th2 Airway Inflammation
2. FeNO Helps to Determine Steroid Responsiveness and Optimize the Dose of Inhaled Corticosteroids
3. FeNO Uncovers Non-Adherence to Inhaled Corticosteroids
4. FeNO Reduces the Likelihood of Exacerbations in Patients at Risk for Future Events
5. FeNO Helps to Identify Asthmatics Who Are Possible Candidates for Treatment with a Biologic

Asthma management is complex and supported by national guidelines that were initially created to emphasize the importance of treating the inflammatory nature of the disease in order to improve patient outcomes (NHLBI 1991). Control of airway inflammation is central to effective asthma management. Today, FeNO (fractional exhaled nitric oxide) is a well-established and specific biomarker for Th2 driven airway inflammation in asthma following almost 20 years since the Nobel Prize was awarded in 1998 for understanding the importance of nitric oxide in the cardiovascular system. Shortly thereafter, the role of exhaled NO in airway inflammation/ asthma pathophysiology became clear.

Airway inflammation is driven by the activation of antigen-specific T-helper cells (Th) type 2 that produce a variety of inflammatory cytokines. Of these inflammatory cytokines, IL- 4 and IL-13 have been shown to induce gene transcription for the production of the enzyme iNOS (inducible nitric oxide synthase) in the epithelial cells of the airway which then release NO in expired breath.(Ekroos 2002, Chibana 2008)

In September 2011, the American Thoracic Society (ATS) published a clinical practice guideline on the Interpretation of Exhaled Nitric Oxide Levels (FeNO) for Clinical Applications: an official ATS Clinical Practice Guideline (Dweik 2011).This practice guideline is designed for clinicians and provides evidence-based recommendations for the use and interpretation of exhaled nitric oxide measurements in clinical practice. This guideline was also formally endorsed and supported by the American College of Allergy, Asthma and Immunology (ACAAI) and the American Academy of Allergy, Asthma and Immunology (AAAAI) in February 2012. FeNO has also been included in the most recent guidelines in the United Kingdom. The National Center for Health and Care Excellence (NICE) recommends FeNO to help diagnose and manage asthma in adults and children. (NICE 2014)

The first device for measuring FeNO (NIOX®) was CE marked in the EU for medical use (predominately for research) in 2000 and cleared in the US in 2003. A second generation device that was easier and more convenient to use in the clinic (NIOX MINO®) was subsequently developed and launched in 2004 (Europe) and 2008 (US). NIOX MINO® was the first device for measuring FeNO that could be performed at the point-of-care, providing information to the physician at the time when treatment decisions are being made. Coinciding with the introduction of NIOX MINO®, the first CPT code (95012 Nitric oxide expired gas determination) was assigned to support billing and reimbursement of FeNO. The current version of the device, (NIOX VERO®) was launched in 2013 (Europe) and 2014 (US) and offers significant advantages in terms of ease of use and portability; providing a FeNO measurement in approximately one minute following a 10 second exhalation. (Maniscalco 2016)